Ian was peeling apples tonight for pie. "Peeling apples is kind of like Exoforce. Once you start fighting a new robot it's hard but when you learn all of its moves it gets easier. That's just like when you start peeling an apple and it is hard to get through the skin. Once you get through the skin it is easy."
Posted by SquidgeyFlint at 5:59 PM No comments: Links to this post

Found this on Gizmodo. Ian really digs it!
Posted by SquidgeyFlint at 10:29 AM No comments: Links to this post

Why is there a dead eel in our fridge? Smoked Salmon in the fridge
Originally uploaded by SquidgeyFlint
Sunday afternoon, when Kim and the kids got back from the Veteran's Day Memorial Service they went to, pretty much her first question to me was: "Why is there a dead eel in our fridge". The question surprized me seeing as how I hadn't bought any eels, live or dead.

I did however pick up a dry smoked Copper River salmon from Costco earlier in the day.
Posted by SquidgeyFlint at 5:24 PM No comments: Links to this post

On Sunday, the raccoons came back, 3 of them. Apparently they aren't as smart as I had thought. Nona and Simba cornered one on the deck and Molly went after one that went under the deck. Seeing as how they were under the deck we couldn't really get Molly's attention to unlatch although maybe we did because she started dragging the raccoon back out. She again had it by the haunch and this time was shaking vigorously.

By the time we got them apart, the raccoon wasn't moving its back legs at all. Sigh. It didn't live through the night.

Those critters may look all fuzzy and cute but they are not to be trifled with. Their size is deceptive and they are all muscle. Very heavy.

Molly went to see Dr. Jane today (Monday) to get looked over and to get her rabies shot up to date. No problems and all is well. We also haven't seen the raccoons any more which is a good thing.
Posted by SquidgeyFlint at 4:50 PM No comments: Links to this post

A raccoon decided to stroll around the deck last night around midnight to snack on some squirrel food. The dogs thought that this was both the greatest thing ever and the a significant and serious threat to the well being of the household.

I was up in bed and heard Kim in the backyard doing a lot of yelling at the dogs. I went down to see what was up and she had Simba and Nona by their collars on the deck and the raccon was up on the rail. By the time I went upstairs to unlock the upstairs slider to get the dogs in, and then went back downstairs to lock the downstairs slider to keep the dogs in, I heard Kim yelling at Molly. At first I thought she was trying to get her in but eventually Molly ended up on the deck in good tussle with the raccoon.

Molly had latched on to the raccoon's hind end (one of it's legs) and the raccoon was underneath her. Kim was standing to one side trying to get Molly to let go and stay out of the middle of it. I ended up having to pick up a broom and whack Molly on the head a couple times to get her to let go. The raccoon finally took of at that point.

Somehow Molly lost a front toe-nail and has a small wound on her front leg. Apparently, before I got outside the first time, Simba and Nona had the raccoon cornered in this blue tube that the kids would crawl through. Simba and Nona don't seem to have any wounds. They aren't licking themselves or each other so Molly's the only one injured.

We believe Molly's rabies shots to be up to date (we've only had her for just shy of 3 years and the shots are every 3 years) but we're going to call the Vet on Monday to be sure. So far Molly seems ok except for the missing front toe-nail.
Posted by SquidgeyFlint at 7:18 PM No comments: Links to this post 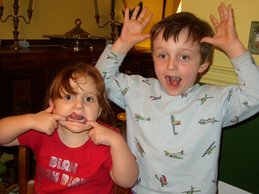